In the last century we have lost more than half of the worlds tropical rain forest and at the current rate it will all be gone in 100 years.

Deforestation is driven by both big business (for soy, cattle, palm oil, sugar and even coffee and chocolate) and lots of small-scale farmers who are driven by extreme poverty.

After working in the Ecuadorian Amazon for 20 years I have become more aware of the issue. It used to be one man, one machete – but now many have chainsaws and so the forest can be cleared much quicker. 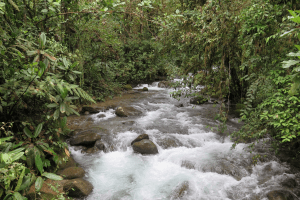 Many local farmers and indigenous communities have told me they want to send their children to school so have no choice than to cut the forest down, sell the wood and turn the land into agriculture.

I am currently speaking wherever possible and promoting the idea of direct payments to farmers who have Key Biodiversity Areas so they can be the caretakers, the seed savers and tree nurseries of the future. This is so much more than carbon offsetting or tree planting.

Supporting the most biodiverse areas and all who live there is now critical. Finding a solution is imperative.

For further, read my recent blog:  Pay to Breathe – Carbon Offsetting Taken to the Next Level.

Pay to Breathe – Carbon Offsetting Taken To The Next Level

Asides from paying the farmers another of the solutions is Agroforestry.

I was contacted by the UK based charity Rainforest Saver and asked to initiate the program in Ecuador. We started in 2016 and now have a successful initiative running in partnership with the local agricultural colleges.

We can show that rather than cutting down more forest we can regenerate disused cattle fields and restore them to fertile soil, whilst sequestering carbon.

Alley cropping is a form of agroforestry using inga edulis grown in alleys where crops are grown between them. Inga is an amazing tree which is a nitrogen fixer, has beneficial fungi in the roots that take up phosphorus and have big leaves which once broken down create a mulch and nutrient rich soil full of microorganisms.

On my last trip I organised comparison plots and we have seen an incredible increase in yield, health and resistance to disease, including preventing cacao fungal rot (which might just save chocolate!).

Asides from preventing deforestation this brilliant method prevents soil erosion and the usage of agrochemicals, pesticides and fungicides and instead builds new fertile soil.

Whilst in the UK

I speak at numerous events about my work and how one person can make a difference, hoping to inspire others into action.

For over 20 years I have been initiating environmental and social projects. After living for 6 months deep in the Ecuadorian Amazon I travelled down river from the headwaters to Brazil and filmed and produced the feature documentary Blood of the Amazon. I co-founded the Amazon Mycorenewal Project to bring mycoremediation (the use of fungi to remediate contaminated soil) to Ecuador and made the short documentary Solution to the Pollution. I have built hundreds of rainwater systems for families who were drinking contaminated water due to the oil industry and built benches and buildings from eco-bricks (plastic bottles filled with rubbish) to clean up villages suffering from plastic pollution.

I have lived in the world’s tallest tree-sit in Tasmania on a platform 65 metres up in a 84 metre high tree to prevent the destruction of old growth forests and been locked down for over 5 months in one of the most biodiverse areas on Earth – The Los Cedros Reserve. If you want to see what biodiversity actually looks like see my iNaturalist page with over 500 different amazing images of species that live there (including some of the 800 species of moth and 400 species of orchid).

Now my focus is entirely on doing whatever I can to prevent the loss of the last few primary forests on Earth and waking people up to find what they can do to assist our beautiful planet at this time.

I am often asked ‘what can I do?’ So I have put together some top tips to help you along the way…

If you would like me to come and speak about my work and inspire you to find solutions, then please visit my Speaking and Contact Me pages or if you can Support my work.

What Can You Do?

My previous projects around the world

Behind each image below gives more details to my projects.